It’s way too easy to misdiagnose what ails the economy these days. Then again, how do you not misdiagnose a condition when you’re seeing the wrong type of doctor? A podiatrist is as likely to catch your brain tumor as a cardiologist is able to treat you for kidney stones. Similarly, and far too often, those who claim to be able to fix the economy, such as then candidate Barack Obama and now the field of GOP candidates, are attempting to use Band-Aids in place of stitches or putting a bruised arm in a cast. 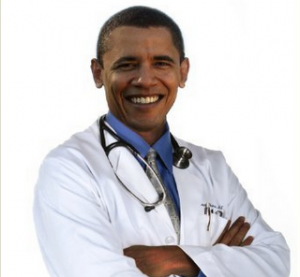 Such economic doctors will read a story in the New York Times and conclude that we need to tax the wealthy more, return to the tax code of the 70’s, and utterly unlearn the Reagan philosophies in order to return to a fair policy toward the poor.

Others might suggest that in order to save the economy, they personally need to swoop in wearing a cape and single-handedly lower tax rates “across the board” so more money flows and business owners create jobs.

Should have used stitches.

Simple fixes cannot act as a long-term strategy to recover the economy, though they may provide a bump that they can take credit for, followed by a slump for which they’ll be able to place blame.

The economy is alive. It is comprised of every person on the planet. Each person has an identity in a worldwide economic game. In this Massively Multiplayer Online Role Playing Game (MMORPG), everyone must follow the rules. Anyone found breaking the rules risks varying punishments ranging from fines to removal from the game for a time while sitting in the State Penitentiary. Of the majority who follow the rules, everyone seeks their own advantage as defined by themselves. Perhaps advantage means personal wealth; perhaps it means spiritual value. Some players form clubs/teams/guilds/unions in order to achieve a greater advantage than would have been possible on their own.

Since the economy is composed of ourselves, there can be only one cause for why the disparity of wealth has increased over the last few decades: we allowed it. When your boss’s tax rate was reduced under any of the past administrations, did you immediately ask for a raise or did you fail to realize that your labors were then more valuable to him? Would you have stepped into a position for an extra $0.50 an hour over what you were making to fill the job made available by someone walking out after having asked for a $3.00/hr raise and not getting it?

Probably the latter and of course you would have, respectively.

Since we cannot trust our fellow man to not undercut us for our own jobs, the only real solution to preventing recessions and depressions–and to recover the economy as it is–is entrepreneurism. More employers means more employees. Lower unemployment means rising wages.

Undoing Reagan era tax cuts only makes it harder on the employers and managers who are now likely leveraged with their own debts they would not be able to pay if their tax rate increases. Lowering tax rates on everyone favors higher income earners dollar-wise and there’s no guarantee that the money will be used to expand a business or even spent at all. It may in fact already be spent and put towards paying off some of that debt.

Having more people own their own businesses has a compound effect: 1) they free up a job for someone to come off unemployment and 2) they hire, directly or indirectly in the form of paying for services or using contractors, people off unemployment.

Moral for the politicians who want to recover the economy: pass policies that encourage entrepreneurism; pass on those that do not.