I finally got around to watching Michael Moore’s financial documentary: Capitalism: A Love Story. I don’t normally agree with the guy’s points of view, and this movie was little different. For the most part, his “heavy hitting” points fell on me like stardust–contrived and without weight. There were a few exceptions and maybe I’ll touch on them in a bit.

Each segment left me more and more convinced that “capitalism” is the most misunderstood and ill-defined word in the English language. As an economic system, it has been described as evil, as “anything goes,” as nonsense, and as the only fair means of running an economy. From what I can tell, though, especially from what was highlighted in the movie, is that few, if anyone, understand capitalism beyond their limited scope.

Before anyone gets offended at my calling your scope limited, please let me explain using some of my engineering background to illustrate. When an engineer sets himself on a problem in a larger process or system, a solution is often found more easily if the scope is set smaller. For example, in a manufacturing process involving multiple mixing vessels, several material streams, and a complicated control system, if liquid comes out of a tank at the wrong temperature, the engineer would limit his analysis to the inputs and outputs of that tank alone. Similarly, most people when shopping for some widget will look at competitors’ offerings, perhaps at different stores, and make a decision on price and value with limited consideration for anything beyond that scope.

Those same people look at the wealthy CEO’s of large companies who make decisions of hiring and firing, opening and closing plants and offices, and on the pay structure of employees in the company and see that they are making decisions based on the quarterly need of pleasing the stockholders with limited consideration beyond that scope.

These people are guilty of the same mistakes and none of them have embraced Capitalism’s awesome power for good.

Moore primarily pointed to the actions of larger corporations and their dealings with the government to highlight the evil nature of capitalism. The government granting special favors to a few at the expense of the many has no role in Capitalism; what Moore depicted was corporate cronyism.

Moore also belittled the idea that the mechanism by which Capitalism operates is that the people vote with their dollars on what products should be made, the producers of which then make more. What he failed to note is that the scope of Capitalism’s mechanism is not limited to what products are made, but how they are made, and by whom are they made.

Is it no wonder that the American people have as much an understanding of the power of their fiscal votes as for their political ones? Namely, very little.

When you need to buy a shirt, your dollars are encouraging not only the manufacturer of the shirt to make more, but making it the way they made it (virgin fibers vs recycled material) and by whom it is made (Asian sweat shops vs large American factories vs small American businesses). You are also supporting the store at which you bought it (corporate behemoth vs Mom&Pop shop) and their business practices (workers’ compensation and working conditions), as well as the store’s entire supply chain (multi-national distribution network vs locally sourced goods).

There is an immense responsibility inherent in spending your money. 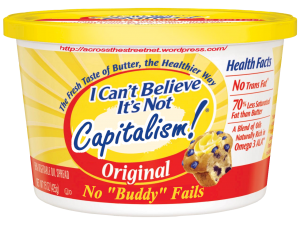 This is spread far more easily than Capitalism and has been for far too long.

As to the people to whom we delegate the spending of much of our income, those we elect to public office, our votes that put them there carry similar weight and needed consideration. Must we have a representative in Congress or the Senate who promises to bring money in the forms of programs and projects or tax cuts to local industries back to our district or state, knowing that in order for our representative to do so he must give something to the others? Must we vote for local benefits when the extra deficit spending will lead to inflation and devalue our money? Those local benefits are likely of lesser value than the lost value of our currency in paying for every other districts’ perks.

How can Capitalism be so evil if everything about it is derived from what we do with our own money? If someone buys pornography, illegal drugs, or arms with the intent to harm, it is not the dollars spent that are sinful. We, collectively, decide what companies thrive and fail and what business practices are acceptable or not, so it is not the system that the Catholic Church should be condemning in the movie, but the people (everybody) using the system to buy everything they use. The greatest differences between Socialism and Capitalism can be summarized as the means by which we vote and the length of term for the consequence of that vote. With Capitalism interested parties attempt to persuade you to vote certain ways with your dollars, votes that can be changed with your very next purchase; In Socialism you elect a politician to make sure everyone else votes the same way with their dollars using government subsidies. If you so desperately want to try another economic system from what we have, try Capitalism because no one alive now has seen Capitalism in the USA.